An animated film has its own rules. It belongs to people with a huge imagination and an artistic soul, because out there in this world, anything is possible. I think that’s why children easly enter into this world, they are born with this imagination, until someone puts it out …

When the film ”Peter and the Wolf” won an Oscar in 2008 and I interviewed the film’s producer from the Polish side, Zbigniew Żmudzki, I was not disappointed. With great distance from all the glitz of the big Oscar Gala, he talked about the extraordinary talent of all those who participated in the creation of this work. This is exactly how I imagined an artist who understands this world.

Now when, at the 17th FilmAT Festival, whose jury chairman is Zbigniew Żmudzki, the film ‘Bielsko-Biała – a City in the Mountains. Here you want to live’ won first prize in the City Promotion category, I knew I had to ask him about a history of Polish animation.

Fragment of the famous historic tenement house “Under the frogs” – photo B.Trzos

Bielsko-Biała and the History of Polish Animation

This is how it all began

More than half of my professional life I have devoted to animation. I was a film producer associated with Se-ma-for Studio in Łódź. During the communist era, there were five state-owned studios producing animated films. The two biggest were my Se-ma-for and the Studio Filmów Rysunkowych (Animated Film Studio) in Bielsko-Biała. These studios have often worked together. For example, Mieczyslaw Janik (native of Bielsko) was the main sound operator in most of the productions both in Lodz and Bielsko. Also legendary were the rallies of Polish animators in Bielsko in the 1970s and 1980s, combined with a sheep roast and banquet.

The Animated Film Studio was abbreviated in our industry as ‘Bielsko’. I guess that’s why I associate the city with cartoon animation, and probably not only me. At one time, Bielsko-Biała’s high-quality wool was also famous. Unfortunately, during Poland’s political transformation, the textile industry collapsed both in my home town of Łódź and in Bielsko-Biała. Anyway, our cities are very similar. They were dominated by the textile industry. Before the war, they were tri-national. Here and there lived Poles, Jews and Germans. In the both city centres you can find a beautiful Art Nouveau and eclectic buildings from the turn of the 20th century. I have been to Bielsko several times and have always been impressed not only by the real “pearl”, the tenement house “under the frogs”, but also by the beautiful villas, the town hall, the municipal theatre, the banks or the railway station. It is not for nothing that the city has been called “little Vienna”. All this is worth seeing when you come to Bielsko-Biała. It is worth to take a stroll through the town and to look at the architectural details, and enter some buildings, to see the interior design.

On the trail of film fairy tales

For me, as a filmmaker, another walking trail is important – the trail of film fairy tales with characters created at the Animated Film Studio.

Back when Zdzisław Kudła was still the Studio’s director, the idea was conceived of placing a statue of Bolek and Lolek – Poland’s most popular cartoon characters – in front of the Studio’s building. Unfortunately, nothing came of this initiative, mainly for financial reasons. Then, in 2008, the studio’s management dreamt of a fairy-tale trail, similar to the Wrocław trail with dwarf sculptures. The same idea was developed at Se-ma-for in Łódź.The authorities in both cities liked this very much and on 3 August 2009, a statue of Reksio the Dog was unveiled in Bielsko-Biała, followed by a statue of Uszatek the Bear in Łódź in December of the same year. 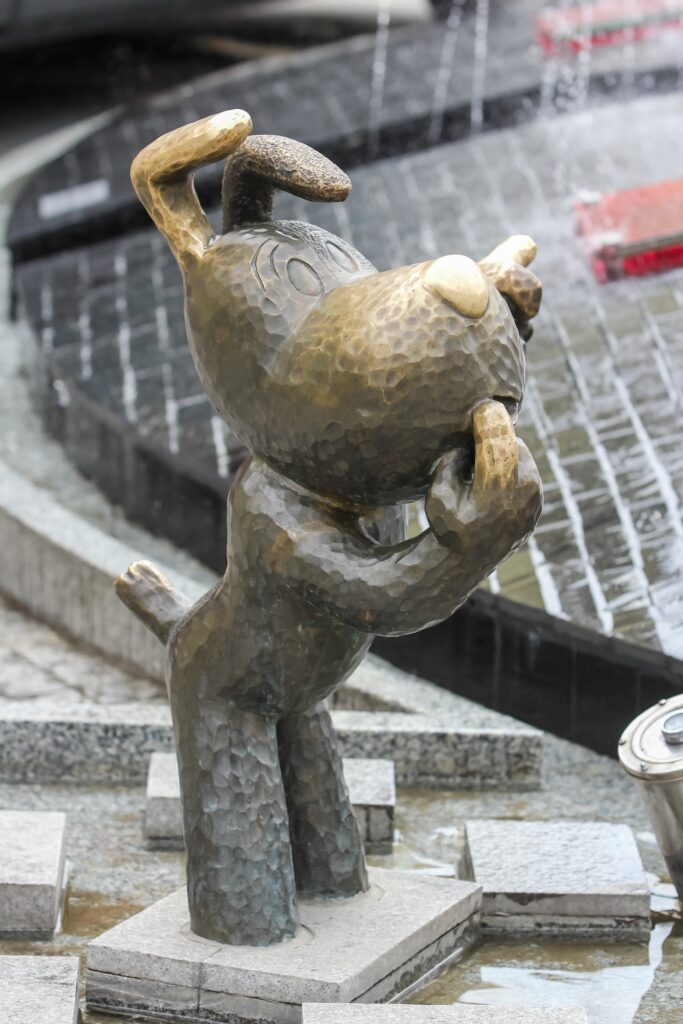 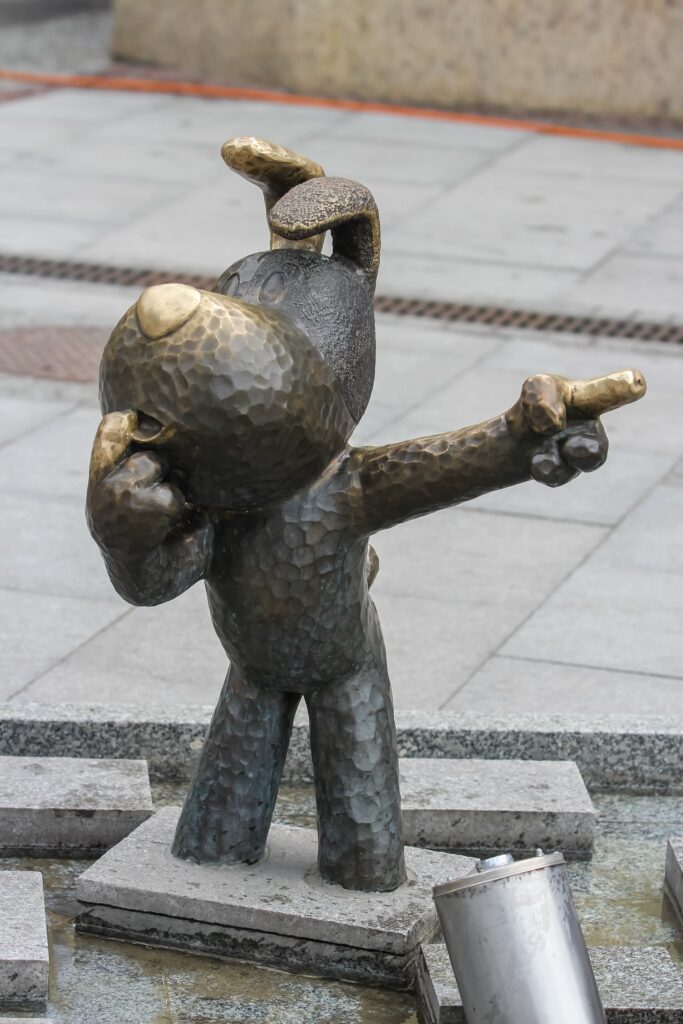 Reksio, designed by Lechoslaw Marszalek, was sculpted by Jarosław Mączka. The figure of the dog was incorporated into a fountain in the shape of an egg cut into four parts, with water flowing out of it. Reksio is a film character who is even more popular among the youngest preschoolers than Bolek and Lolek, who are liked by slightly older children. Between 1967 and 1990, nine individual films and 44 serialised episodes were made featuring this friendly dog. I was a little envious of Bielsko’s first statue, because it was already there, and in Łódź there were still discussions about where Uszatek the Teddy Bear should stand.

The fountain with Reksio in the small square at 11 Listopada street next to the bridge over the Biała river has quickly become the most popular place in Bielsko-Biała, visited by both residents and tourists. Everyone should obligatorily stroke Reksio’s nose or ear. 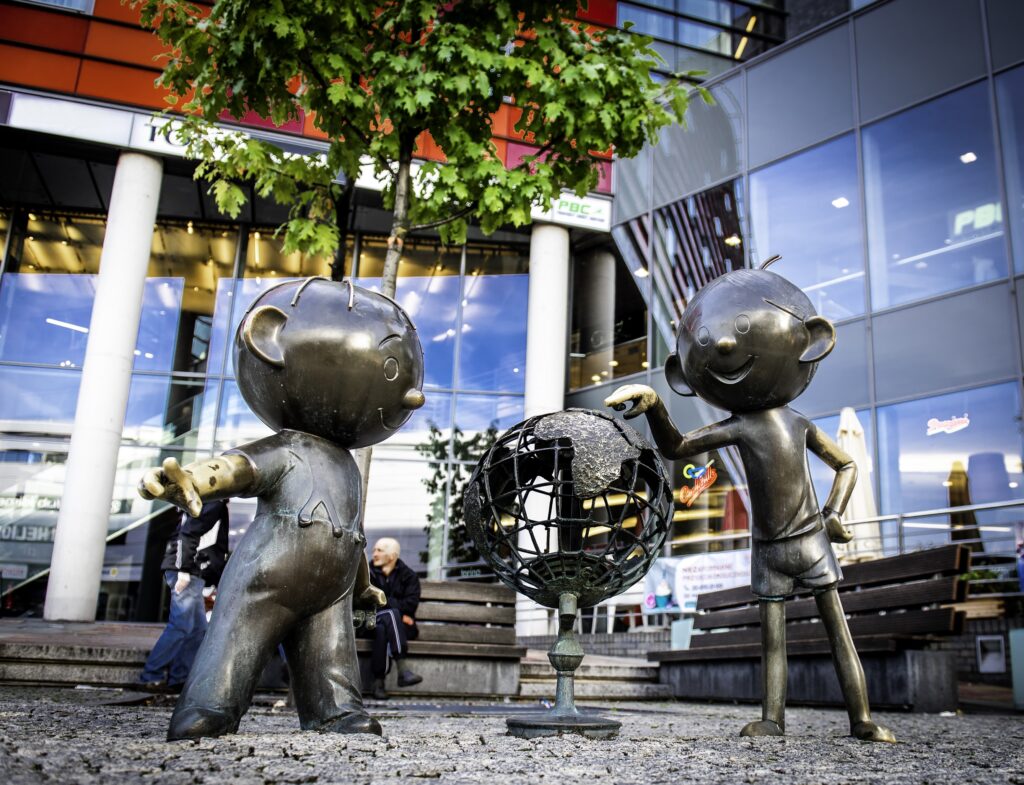 Two years later, Bolek and Lolek appeared on the square in front of the Sfera Shopping Centre with a globe on which the city of Bielsko-Biała was marked. The sculpture’s creator was Jarosław Mączka. The heroes of Poland’s longest-running children’s TV series deserved this monument. They were known not only in Poland; the series was shown on television in more than 80 countries. In some, their names were changed, e.g. in English-speaking countries they appeared as Benny & Lenny, Jym & Jam and Tim & Tom. Between 1963 and 1986, 174 television episodes and four feature-length cinema films were filmed. The concept of the series and the designs of the main characters are a collective work. When the first episodes were made, not much care was taken about the copyright of the creators. It was only later that it became apparent that these were important and a court dispute over their authorship had to be waged for almost thirty years. In the end, the rights were granted to Władysław Nehrebecki, Alfred Ledwig and Leszek Lorek. 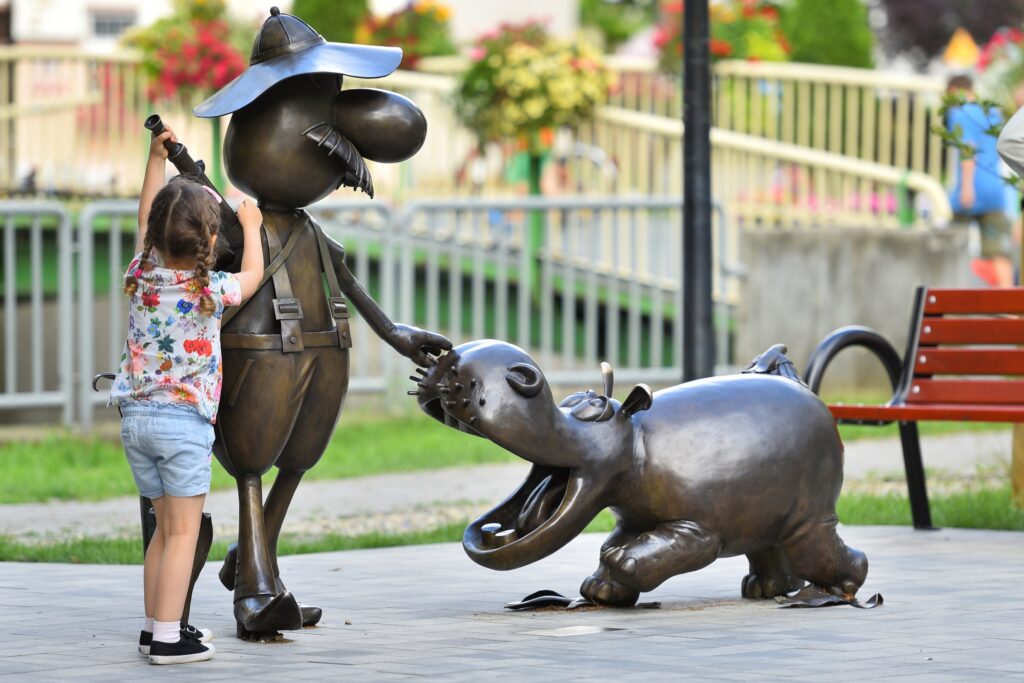 On 5 December 2019, another sculptural composition was unveiled in the square on Bohaterów Warszawy Street, near the Town Hall, depicting characters from the cartoon

‘Pampalini the animal hunter’, produced at the Aninated Film Studio between 1975 and 1980.The statue features a character from the series with a hippopotamus. Children often get on the hippopotamus; this is possible because the animal is made very solidly, in bronze, and children’s games will not harm it. The main creator of the series was Bronislaw Zeman. 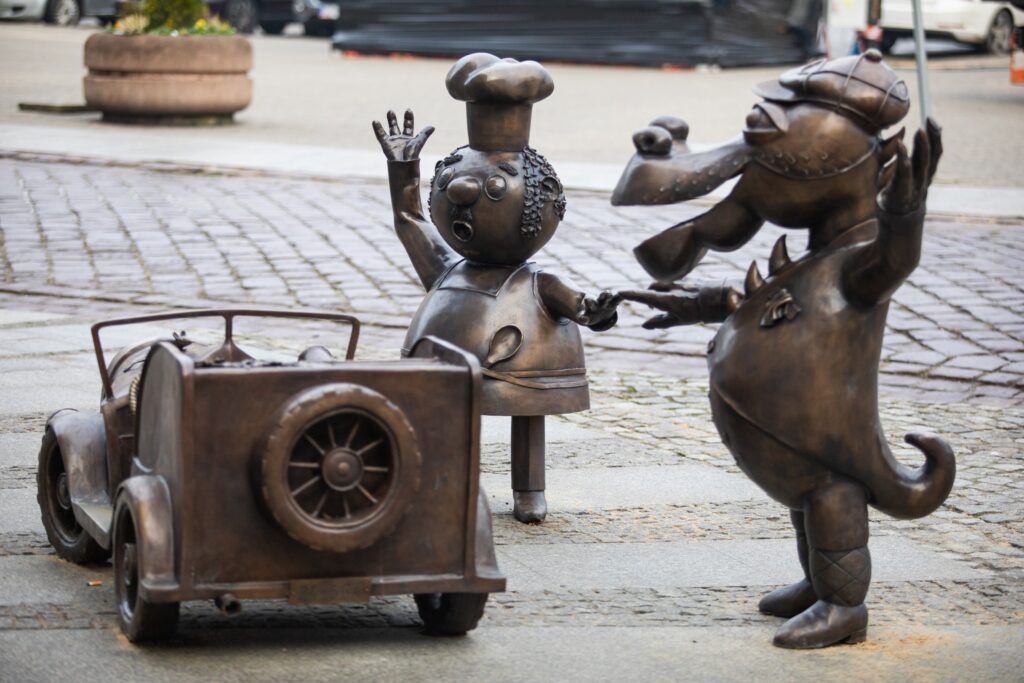 The fairy-tale trail has been supplemented over the past two years by further statues of characters remembered this time from the TV bedtime story ‘The Kidnapping of Balthazar Spong’. In December 2020, a sculpture depicting the Wawel Dragon and the cook Bartholomew Bartolini of the Green Parsley coat of arms was unveiled. There is also an amphibious car of the heroes that children can enter. The composition is located at the intersection of 11 Listopada Street and Ratuszowa Street. Nearby, in September 2021, a statue of Don Pedro, the spy from the Land of Rain, accompanied by the fantastic creature Mypinga, was erected. In the film, Don Pedro, with his characteristic shout – Carramba! – tirelessly tracks down the main characters. The series was realised between 1969 and 1970. Both sculptural compositions were designed by the well-known Bielsko artist Lidia Sztwiertnia, who had already created the Pampalini monument. 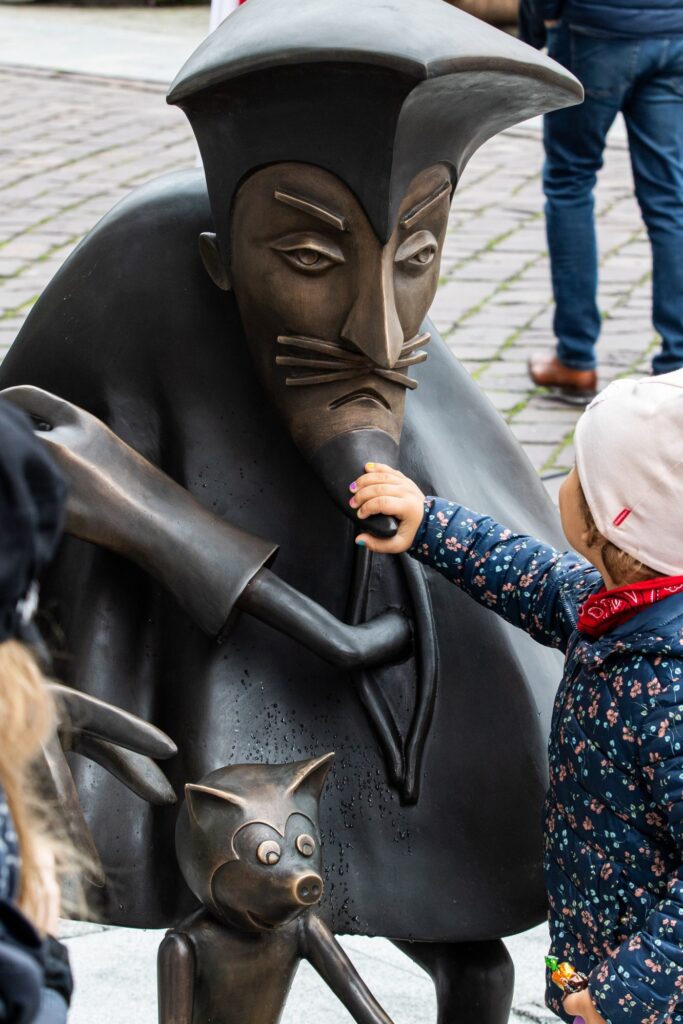 The city intends to continue work on the creation of the fairytale trail, with the rumoured next candidate for the statue being Captain Clipper from the thirteen-episode series ‘Captain Clipper’s Travels’, produced between 1986 and 1990, which was a funny tale about pirates. There are many other good series and cinema films in the output of the Animated Film Studio, whose characters deserve a monument in bronze.

The future of the legend of Bielsko-Biała

Film locations in Bielsko-Biała are not just monuments. It is first and foremost the Animated Film Studio on Cieszyńska Street.

It was founded 75 years ago on the initiative of Zdzisław Lachur, by amateurs, but they were very talented visual artists, fanatics of animation. The group was initially active in Katowice at the editorial office of “Trybuna Robotnicza” newspaper. At the beginning of 1948, it moved to Wisła, and then to Bielsko-Biała, where it settled for good, although it is said that they found themselves here by accident. The creators were unhappy with the villa in Wisła where they were to work (it took a long walk up a high mountain to get to it) and so they decided to find new premises in Wrocław. On the way they had a transfer in Bielsko -Biała and at the station they met a local official who convinced them that they might as well settle in the city. After the displaced Germans, they were able to take over a house for their work. After a short search, they were placed in the Roth Villa on Cieszyńska Street. It was there where all the iconic bedtime stories were made.

In the 1950s, the studio was a branch of the Łódź Feature Film Studio, and from 1 January 1956 it became an independent enterprise and took the name Studio Filmów Rysunkowych. In the same year, a group of filmmakers went to Warsaw to set up a branch there, later transformed into the Studio Miniatur Filmowych.

After the political change in Poland, when the state film studios lost their production monopoly and their activities were not financed anymore by the Ministry of Culture, hard times came for them. Unfortunately, the Łódź-based Studio of Small Film Forms Se-ma-for did not survive. On its ruins I founded the creative company Se-ma-for Film Production. In Bielsko-Biała, the then directors Zdzisław Kudła and later Andrzej Orzechowski managed to keep the studio going, as activities were expanded.

In 1999, a cinema was opened; later, during Andrzej Orzechowski’s tenure as director, a museum was set up, where not only were exhibits shown but also film workshops for children and young people were organised. I set up a similar museum in 2008 in Łódź at Se-ma-for. Unfortunately, three years after my retirement, the Łódź museum ceased to exist. Praise be to Bielsko-Biała for the fact that the idea of a museum began to develop and the project of an Interactive Fairy Tale and Animation Centre was developed. “It is intended that ‘Fairy Tale World’ at the Studio is a combination of an interactive, modern museum and an amusement park typical of exhibition displays at foreign film studios,” – Andrzej Orzechowski, director of the Bielsko-Biała based studio, said at the time. Thanks to the director’s persistence, EU and government funding was obtained and a major investment was launched. Andrzej Orzechowski has now retired, but his successor is continuing the work. In autumn 2023. The centre should welcome its first visitors. Bielsko-Biała will have another great tourist attraction.

Bielsko-Biała takes care to promote the city. At international tourism and promotional film festivals the film “Bielsko-Biała – a City in the Mountains. Here you want to live” has won many awards, including one at the Polish FilmAT Festival, where I had the honour of being chairman of the jury.

I was recently invited to a festival of such films in Turkey; one of the main prizes there was awarded to another film promoting Bielsko-Biała, made by a Bielsko-Biala resident, Tomasz Walczak. In my opinion, he is the best Polish filmmaker shooting in the impressive timelapse technique. I read on the Internet that he is creating another film about Bielsko-Biała, this time in cooperation with the City Office. Bravo!

“Bielsko-Biała – a City in the Mountains. Here you want to live”
– 17th FilmAT Festival – 1st prize in Category
TOURISM COMMUNICATION/City Promotion/National competition
Bielsko-Biała and the History of Polish Animation